The seventy years of Soviet rule were transformative in the history of Central Asian Islam.  The Soviets had a utopian vision of remaking the world — economy, society, the individual, culture, politics — that drove their highly intrusive policies of radical social and cultural engineering.  As Marxists, the Soviets saw religion as an “opiate of the masses,” an ideological cloak used by oppressive classes to hide the true nature and extent of their oppression. The struggle against religion therefore occupied a central place in the policies of transformation pursued by the Soviets.  The Soviet period therefore saw a frontal assault on all manifestations of Islam in Central Asia and other regions of the Soviet Union inhabited by Muslims.  This assault and its aftermath defined the experience of Soviet Muslims in significant ways.  This section describes key aspects of Soviet policies toward Islam and discusses some of their consequences for Islamic movements. 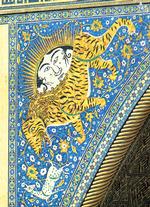 Religious suffering is, at one and the same time, the expression of real suffering and a protest against real suffering. Religion is the sigh of the oppressed creature, the heart of a heartless world, and the soul of soulless conditions. It is the opium of the people.

The abolition of religion as the illusory happiness of the people is the demand for their real happiness. To call on them to give up their illusions about their condition is to call on them to give up a condition that requires illusions. The criticism of religion is, therefore, in embryo, the criticism of that vale of tears of which religion is the halo.
Karl Marx, Introduction to A Contribution to the Critique of Hegel’s Philosophy of Right (1844)

The establishment of Soviet rule was a low process on this distant periphery of the former Russian empire.  Revolution had led to civil war, which cut Central Asia off from the rest of the empire.  The re-establishment of central control took several years, during which few central policies or laws could be implemented locally, and in many cases, central authorities expressly exempted Central Asia from new laws that displaced the authority of religion from public life.  Thus, the radical 1918 law on marriage, or the prohibition on teaching religion in state schools were not applied to Central Asia.

Nevertheless, by the end of 1922, the new authorities had begun to bring various aspects of Islam under state control.  Islamic courts were regulated and their jurisdiction circumscribed ever more closely.  Endowed (waqf) properties were also brought under control and their revenues directed toward educational purposes.  Madrasas and maktabs continued to exist, but official attitudes toward them were increasingly hostile.  The political space in which Islamic institutions existed shrunk gradually over the course of this decade.

The economic chaos of the period further weakened the infrastructure of Islam.  Many mosques became derelict, madrasas lost students, and many waqfs were embezzled.  The same chaos, however, strengthened and radicalized existing reform currents.  Criticisms of traditionalist ulama became routine and ever more blatant.  Here, “Islamic” critiques of the ulama overlapped with “Soviet” critiques of them.  The main medium for this critique was the cartoon, which appeared in new numbers in satirical magazines published by local branches of the Communist Party.  The most important of these was the Uzbek magazine Mushtum (The Fist), which  began publication in 1923. It survived the entire Soviet period as a conduit of politically approved satire, and it still exists.  In the 1920s, however, its cartoons did much to displace the authority of the carriers of Islam in the public sphere.

In late 1926, Party policy toward cultural and religious matters in Central Asia shifted dramatically.  Feeling more secure in power and more impatient with the pace of change, the party decided to launch a massive campaign against all forms of “backwardness,” which included Islam in the first rank.  The epicenter of this campaign was Uzbekistan, and the metaphor for this campaign was that of the assault, hujum.

The assault was ferocious and destructive, though it began modestly enough, with Uzbekistan’s people’s commissariats of justice and education beginning to shut down all unofficial schools. Islamic courts were similarly suppressed quickly, the waqf administration abolished and all property controlled by it nationalized. Along with schools and courts went the mosques.  A few mosques had been closed earlier in the decade and their buildings given over to “socially useful” purposes, but the years between 1927 and 1929 saw a sustained campaign of closures and destruction directed against them.

The campaign against mosques and shrines tended to run out of control.  The situation was so chaotic that the documentation in the archives is very scanty.  It is fair to say that we have better accounts of the destruction visited upon Islam in Central Asia by Genghis Khan than by the Soviets.  The evidence of destruction was to be found in the form of half-destroyed or disused mosques that dotted the landscape for the rest of the Soviet era.

The ulama had long been reviled both for being relics of a superstitious past that had now been superseded, and for being class enemies of the revolution and the oppressors of the toiling masses that were heroically striving to push History to its final stage.  Again, we do not have eyewitness accounts to retrieve these atrocities from oblivion, but by the time the antireligious campaign slowed down in 1932, thousands of ulama had been arrested and sent off to forced labor camps; many died or were killed; and others “fell silent.”

With old-method schools and madrasas destroyed, waqf property confiscated and redistributed, and qazi courts abolished, the patterns through which Islam had been transmitted in Central Asia were largely destroyed.  In 1929, a country-wide law on Religious Associations [see document here] defined the scope of “religious activity” that the regime was willing to allow in the new conditions.  Religious activity could only take place in officially recognized societies or groups of “believers,” who had to be registered with local authorities.  Religious organizations had the right to operate places of worship, although on terms dictated by the authorities.  They were forbidden to form benevolent societies, render material support to members, or organize study circles or camps for children or youth. The assumptions about religion that underlay the law – that it is a corporate enterprise undertaken by “believers” coming together in tangible organizations – derived from Christianity, but were now extended in Soviet practice to all religions.

This law lasted until the twilight years of the Soviet Union and provided the state with means for controlling religious organizations and religious activity.  It also meant that from hence on, Soviet law existed in implicit opposition to religion and religious sensibilities and had no connection with religious law. All further legislation (for example, this Kazakh law from 1976 rested on the principles enshrined in the 1929 law).  By the 1930s, Soviet borders were closed and intercourse with the rest of the world tightly controlled.  Soviet Muslims were cut off from other Muslim societies, and Soviet Islam became effectively localized and isolated from the broader Muslim world.