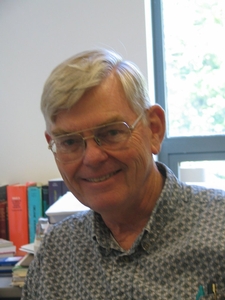 Our research broadly focuses on natural products chemistry. We are currently interested in exploring potentially bioactive compounds, principally modified peptides related to compounds isolated from marine organisms and to alphafetoprotein.


Marine cyanobacteria are a rich source of unusually complex molecules that frequently have intriguing varieties of biological activity and therefore show promise as drug leads, frequently as anticancer compounds.  The cyanobacterium Moorea producens, formerly called Lyngbya majuscule JHB, has been shown to produce a variety of active compounds, including jamaicamides A and B, pheophytin, and hectohlorin.  These can be detected in the cyanbacterium itself by analysis using MALDI mass spectrometry.  A new compound, having a molecular weight of 399, was also detected, and isolation and structure determination revealed the compound called cryptomaldamide, shown below.  Unlike the other compounds present in the cyanobacterium, cryptomaldamide was not particularly cytotoxic; its IC50 against H-460 cells is a modest 17 μg/mL.  A family of compounds derived from the sponge metabolite hemiasterlin has been shown to demonstrate powerful antitubulin and cytotoxic activities (IC50 1-5 nM), more than 104 times as active as cryptomaldamide.  However, the similarity between the structures stimulated some speculation.  All of the most active members of the hemiasterlin family have aromatic rings on the N-terminus, while cryptomaldamide has the polar primary alcohol derived from serine.  We have begun a project to


explore how the more basic guanidine group on theN-terminus of the cryptomaldamide might affect the cytotoxic activity of compounds more closelyrelated to hemiasterlin.  The syntheses of these compounds is relatively straightforward and once in hand will be submitted for cytotoxic and antitubulin activities.


Alphafetoprotein  (AFP) is a large globular protein secreted by the fetus, and is one of the first globular proteins to appear in human serum.  The protein is comprised of 590 amino acids, with a molecular weight of 70 kDa.  While a woman is pregnant, the AFP crosses the placenta and enters the maternal circulation.  Although maternal levels of AFP are much lower than in the fetus, the levels continue to rise until week thirty-two of gestation, after which the AFP gene is repressed and serum levels fall to a negligible level.  The AFP is critical to the development of the fetus, acting as a carrier for unsaturated fatty acids.  Levels of AFP in the amniotic fluid and maternal serum have also been used to screen for defects in the fetus; AFP can also be a tumor marker since some cancers produce AFP.

In the 1980’s Jacobson reported a correlation between women who had had multiple births, especially before age 30, and reduced risk for breast cancer. He suggested that the increased levels of AFP in these mothers offered some protection against the disease.  A decade later Melbye reported a study that showed that women with AFP levels greater than the median value had a significantly lower risk of breast cancer, and the relation was especially strong for women who became pregnant at an early age.

Study of AFP at the molecular level revealed that the protein would inhibit both uterine and breast cancers, but would only inhibit breast cancer in the presence of estradiol.  Furthermore, AFP could only inhibit estrogen receptor positive breast cancers.  Since AFP only inhibits breast tumors in the presence of estradiol, it was believed that the estradiol brings about a conformational change because of a molecular “hinge” to reveal an active site in the third of three domains of the AFP.  Studies on Domain III, a 34-amino acid sequence, showed that it inhibits the growth of breast cancers and that its activity does not depend on the presence of estrogen.  Studies of smaller and smaller fragments of Domain III by Andersen revealed that inhibitory activity for MCF-7 and T47D cancers was largely retained.  He showed that a peptide, called AFPep, with the eight amino acids 472-479, EMTPVNPG, showed 49% inhibitory activity, compared to 45% for AFP itself, and was active at a considerably lower dose.  However, there were serious drawbacks to the further development of this peptide as an anticancer agent.  Its shelf life is four weeks, during which the peptide aggregates, leading to loss of activity, and the peptide also shows a biphasic dose-response curve.  To stabilize the peptide, the Andersen group synthesized two cyclic peptide analogues of AFPep, EMTOVNOG and cyclo-EMTOVNOGQ in which proline was replaced by hydroxyproline in order to increase their hydrophilicity.  Both of these peptides were active, but more importantly they demonstrated vastly increased shelf life, and the cyclic peptide displayed a larger dose range than AFPep. 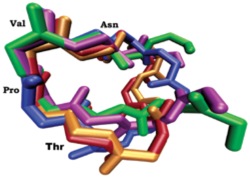 four amino acid sequence, TPVN, is conserved in conformational space of all of the active peptides (See Fig 1).  Furthermore, when the synthetic peptides TPVN and TPVNP were assayed for antiestrogenic activity, they afforded activities comparable to the active linear peptides prepared earlier by Andersen and coworkers. In a recent paper Andersen showed that AFPepwith a hydrophobic
amino acid “tail” demonstrates enhanced inhibition of estrogen stimulated uterine growth.

The accumulated work on the peptides from AFP suggests that appropriately constructed cyclic peptides, peptidomimetics or depsipeptides containing the TPVN pharmacophore can display comparable or even enhanced activity. Furthermore, there is some suggestion in the literature that they promise enhanced stability and bioavailability. We propose to prepare a variety of model compounds that explore some of the possible structural types.  These would also contain a hydrophobic distal portion.  Initially, methylene linkers will constitute the hydrophobic part, but linkers containing aromatic rings should also be included. These would be tested for activity, either by in house assays or by sending them out. Based on these results we then hope to develop a series of analogues that can hone the structure-reactivity relationships in the more active structures.  Using a broadly based strategy for synthesis that includes both solution and solid phase approaches, cyclic peptides and depsipeptides with methylene linkers, as shown in Fig. 2, can be prepared. 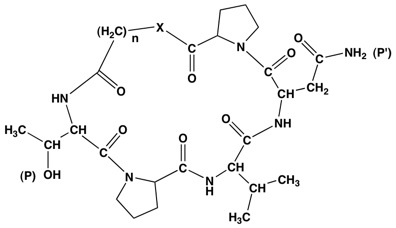 The methodology for preparing these structures is well established, but care must be taken to utilize the methods that give the best yields and retention of stereochemical integrity.  The linear peptides can be synthesized using literature methods, protecting the threonine hydroxyl group and/or the carboxamide group of the asparagine if necessary.  Formation of the cyclic peptides or depsipeptides has been frequently accomplished by using the Yamaguchi protocol. A second approach to formation of the rings is to prepare the appropriately constructed allyl or butenyl compounds and carry out a ring-closing metathesis using Grubbs’ catalyst (Fig. 3.).