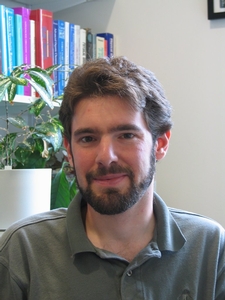 Two themes are central to current research projects in Prof. Rosenstein’s lab: addition reactions of carbon centered radicals and the chemistry of small ring systems.  Of particular interest is the chemistry of the cyclopropylcarbinyl radical.  Two projects in the lab combine these two interests, focusing on the ring opening of the cyclopropylcarbinyl radical.  One of these projects is a mechanistic study while the second aims to utilize this reaction in synthetic transformations.  Specific projects include:

1. Does the Cyclopropylcarbinyl Radical Ring Opening Reaction Occur through a Dipolar Transition State.

Specifically, our goal is to synthesize a series of precursors to aryl substituted cyclopropylcarbinyl radicals, varying the electronic nature of the substituents on the aromatic ring from electron-rich to electron-poor.  If the transition state has dipolar character, the rate of the reaction should increase as the aromatic substituent becomes more electron-poor.  The exact nature of this variation can be examined using the Hammett equation to provide direct quantitative evidence to support or disprove the participation of a dipolar transition state.

Cyclopentane containing bi- and tricyclic frameworks are common in biologically important natural products but methods for the direct synthesis of cyclopentanes are fairly limited.  In this project, we are examining the use of the radical mediated conversion of vinylcyclopropanes to vinylcyclopentanes, a well explored reaction for monocyclic systems, for the synthesis of bi- and tricyclic cyclopentane containing compounds.  Of particular interest is developing methodology for using chiral auxiliaries to control the stereochemical outcomes of these reactions.  An example reaction sequence is shown below.

We are working to develop methods for the stereoselective synthesis of the bicyclic cyclopropanes that are needed as precursors for the radical cascade processes described above.  Specifically, we plan to carry out these reactions using ylide reagents that are substituted with the same chiral auxiliaries that we will use to control the stereochemistry of the radical reaction.

Our research group is involved in a collaborative project with Prof. Camille Jones to study the dynamics of the movement of propylene oxide inside a clathrate hydrate cage.  In order for Prof. Jones’ group to carry out the dynamic studies using inelastic neutron scattering, our group is synthesizing the three possible selectively protiated propylene oxide molecules shown below.